Watch happenigs as they unfold

Save your searches for premium outlets of your liking! 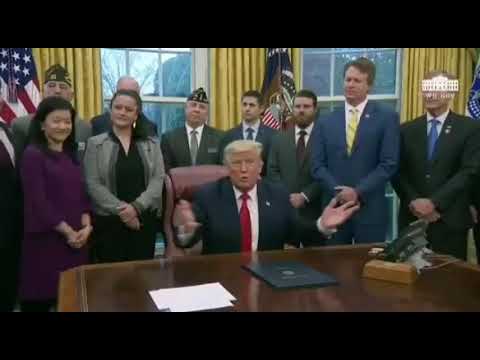 US President Trump on India Visit: we will have millions of millions of people from the airport to the new stadium, the largest stadium; Modi is a great gentleman, looking forward to India's visit. If we can make the right deal, we will do it: Trump in response to if trade deal will be signed during India visit Washington:  US President Donald Trump has said that he is looking forward to his first visit to India later this month and indicated that the two countries may sign a trade deal. At the invitation of Prime Minister Narendra Modi, Donald Trump is slated to travel to India on February 24 and 25. In addition to New Delhi, he will stop in Ahmedabad in Gujarat to address a joint public meeting with PM Modi at a stadium. "He (Modi) is a great gentleman and I look forward to going to India. So, we'll be going at the end of the month," President Trump told reporters in his Oval Office, a day after the White House announced dates of his anticipated India trip. Responding to a question, the president indicated that he is willing to sign a trade deal with India if it is the right one. "They (Indians) want to do something and we'll see... if we can make the right deal, (we) will do it," said President Trump, a fortnight ahead of his visit to the country as the 45th US president. India's new Ambassador to the US, Taranjit Singh Sandhu told news agency Press Trust of India that Trump's forthcoming visit is a "reflection of the strong personal rapport" between President Trump and Prime Minister Modi. "It also demonstrates their strong desire to take the relationship to new heights," said Mr. Sandhu, who had presented his credentials to Donald Trump in Oval Office last week. Over the last three years, President Trump and PM Modi have developed a personal friendship and in 2019, the duo met four times including their joint address before a strong 50,000 crowd of Indian-Americans in Houston. This year, they have spoken over the phone on two occasions, including the one over the weekend. "Just spoke with Prime Minister Modi," Donald Trump told reporters on Tuesday in response to a question on his India visit. Excited to travel to India later this month, said President Trump referring to his conversation with PM Modi during which the Prime Minister apparently told him about the hundreds and thousands of Indians who would be there to welcome him in Ahmedabad. President Trump jokingly told reporters that now he will "not feel good" about the size of the crowd that he addresses in the US which is usually between 40,000 to 50,000. "He (Modi) said we will have millions and millions of people. My only problem is that last night we probably had 40 or 50,000 people... I'm not going to feel so good... There will be five to seven million people just from the airport to the new stadium (in Ahmedabad)," Donald Trump said. "And you know (it) is the largest stadium in the world. He's (Modi) building it now. It's almost complete and it''s the largest in the world," President Trump said. The two leaders are expected to joint address a massive public rally at the newly build Motera Stadium in Ahmedabad. Being built at an estimated cost of USD 100 million, the Motera Stadium with a seating capacity of 100,000 spectators will be the world''s largest cricket stadium overtaking the Melbourne Cricket Ground in Australia.